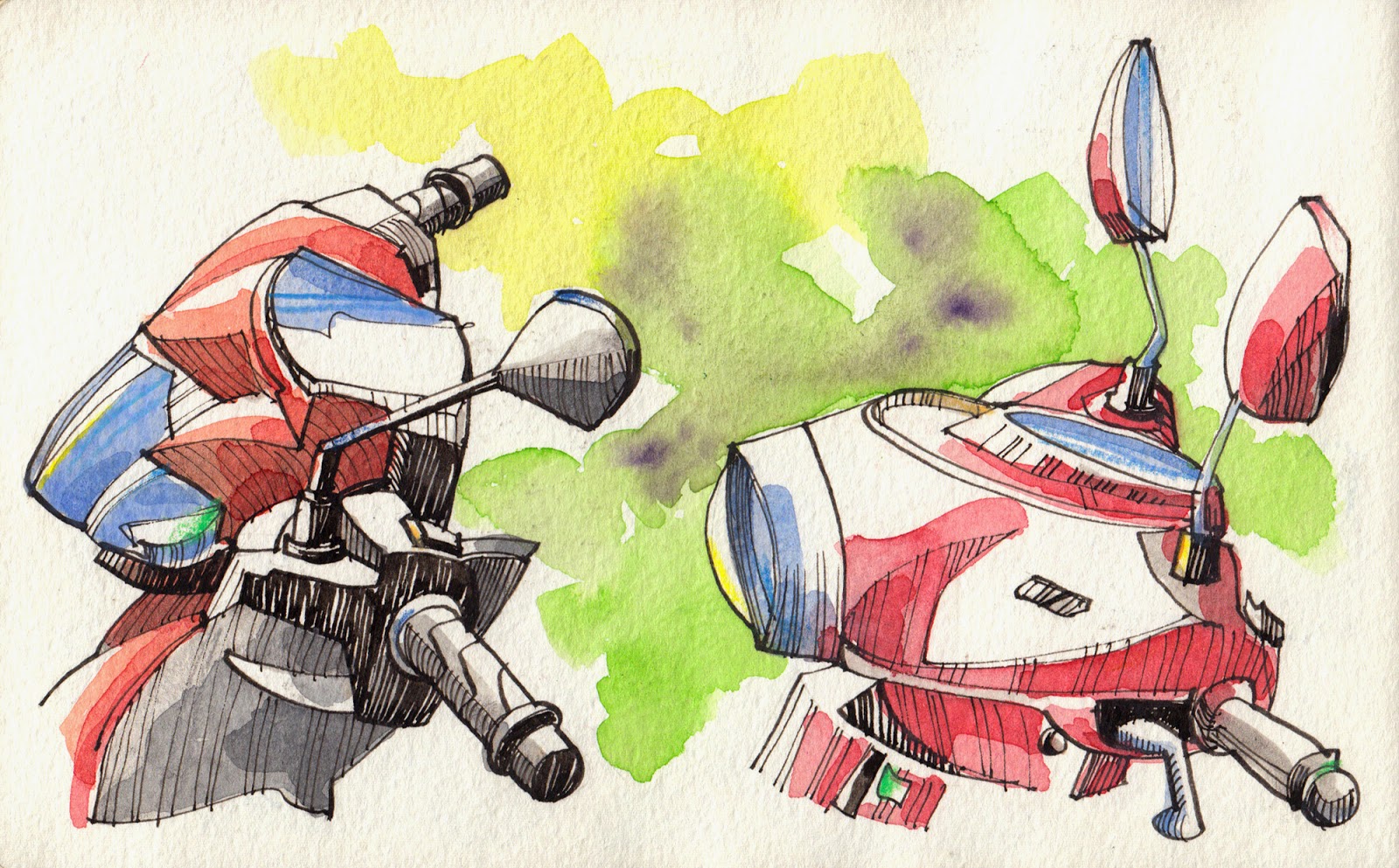 I had been sitting in that restaurant some time already, and these two bikes were at the side. Not always one has something nice to draw at hand, but these two were worth it. 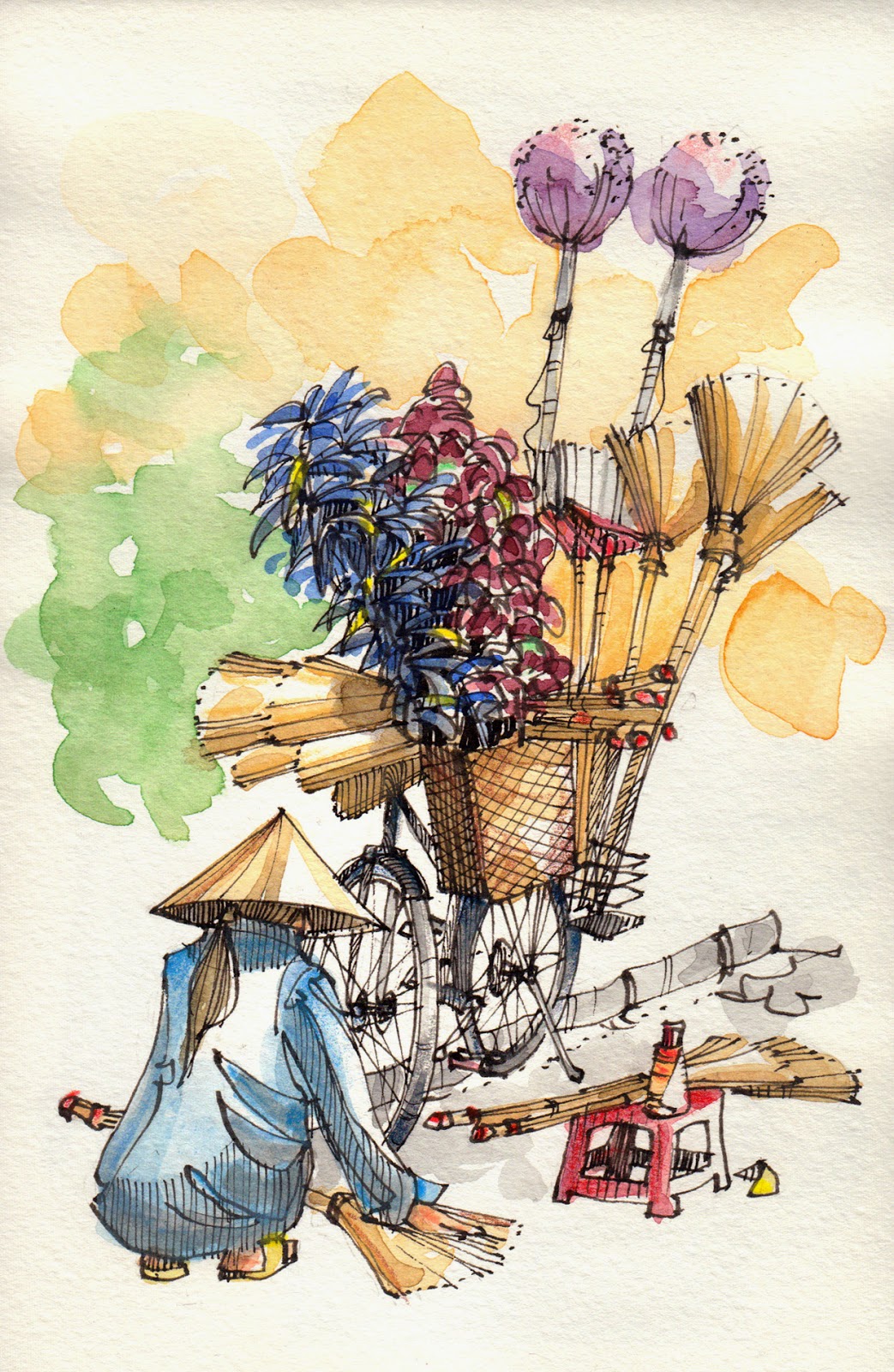 Bicycles in Vietnam.... When I visited the first time in 2001, everyone had one, and families struggled to buy a motorcycle. There were motor bikes in the street, yes, but half of all two wheelers were bicycles.

Today... lets say that 13 years ago I panicked riding MY bike in Bangkok, and felt relieved when I arrived in the -relative- quiet of Saigon. Now, there is no difference. Riding a bicycle in today's 'Vietnamese beehive cities' (Hanoi and Saigon) is as safe as BASE jumping.
But... there are still some street vendors immutably -and solemnly- moving back and forth some goods. Brooms, flowers, kitchen pans, and a lot of other stuff imposible to sell from a motorcycle. For them, bicycles are more a moving stall than a vehicle, and most times they WALK the bicycle, rather than ride it. 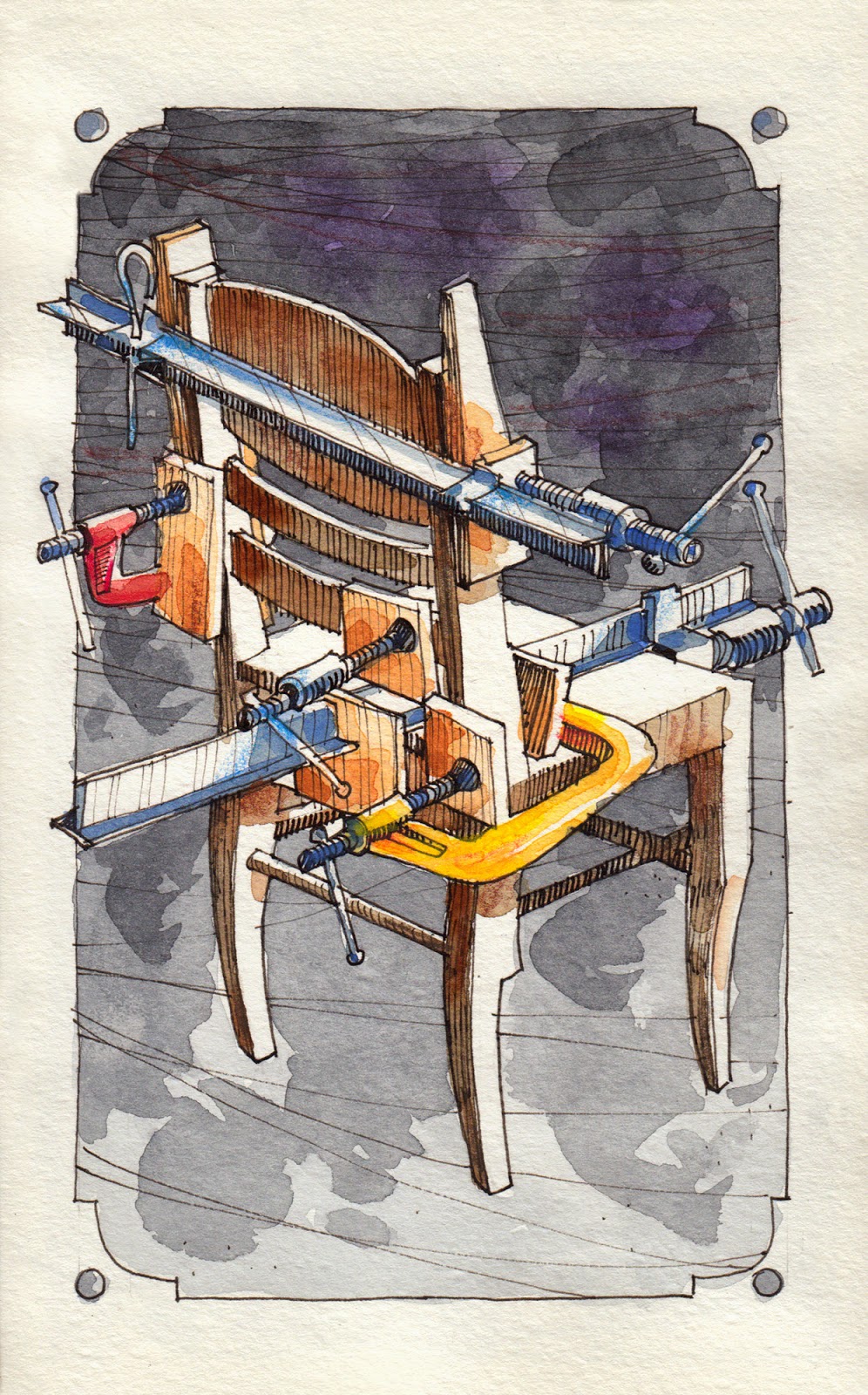 This chair was there, being fixed at a carpentry shop in Hoi An.

Not only it was an interesting art subject by itself. It also forced me into evaluating the western attitude of replacing perfectly good stuff with new, more fashionable but similar items, against this approach, where things are fixed over and over through generations no matter the effort. 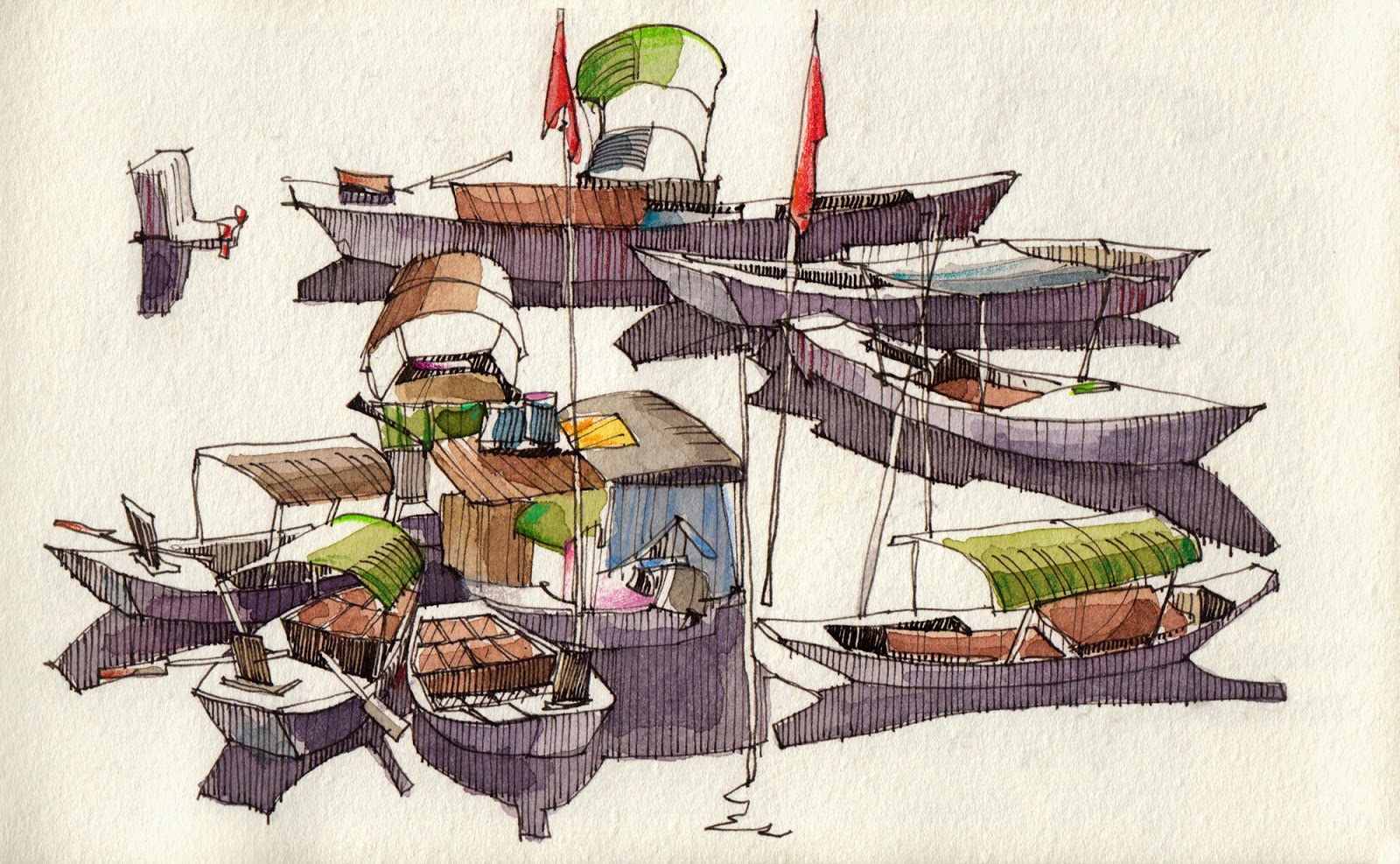 The Red River flows from Yunnan in southwest China through northern Vietnam. It divides Hanoi in half and the historical cantilever Long Biên Bridge connects both halves.

The bridge was heavily (and unsuccessfully) bombarded during the war. Under it and along the river, poor families coming from many rural areas of Vietnam live in boats under canvas and plywood huts. 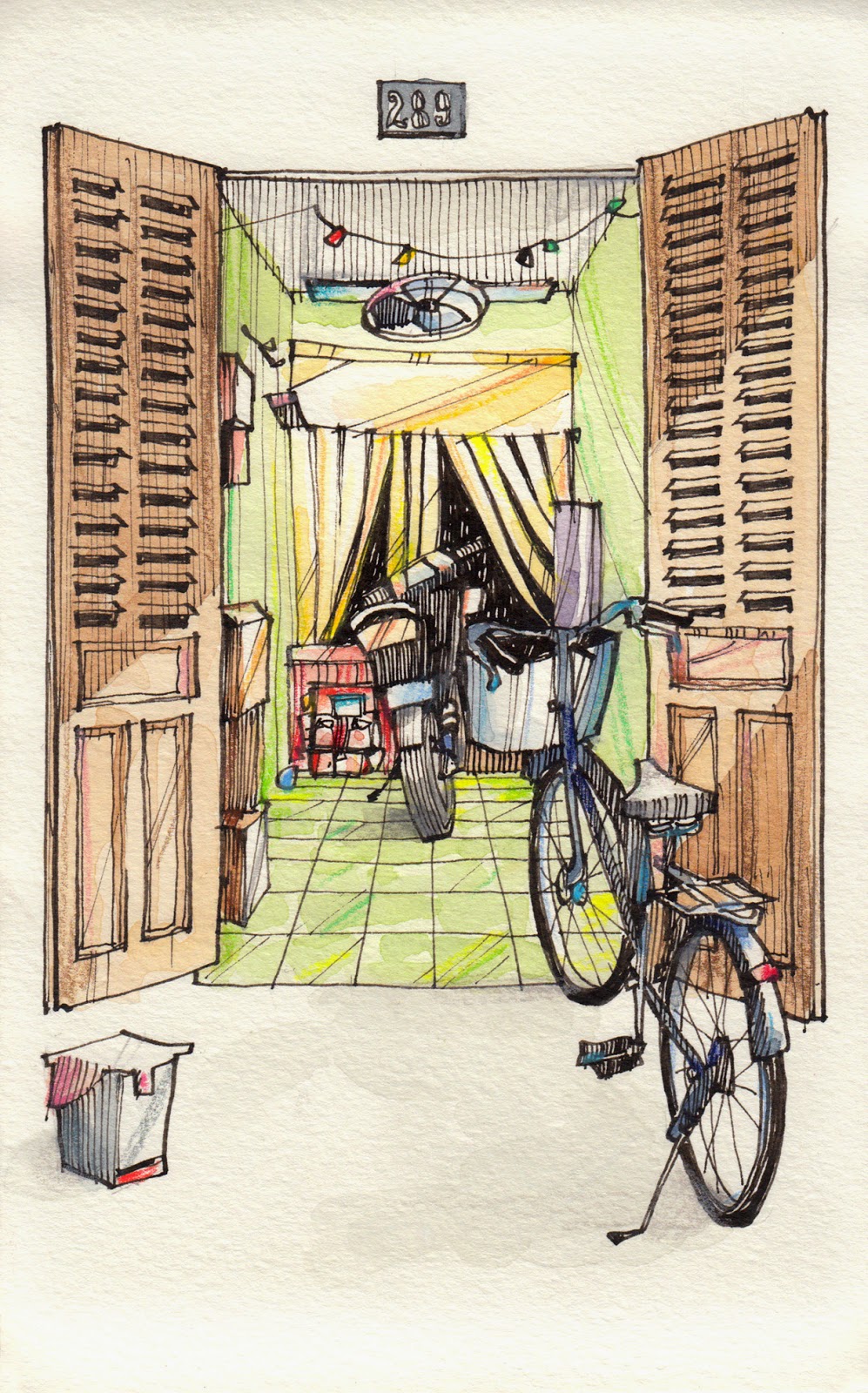 One of the facts that amazes me the most in Vietnam is the fashion houses are open to the street. In the west, the line between public and private is quite defined. A fence in USA and Europe, and a heavily closed metal door (often with an armed security guy behind) in South America.

In Southeast Asia instead the street is an extension of the house.
Doors? What?
I've seen a 5-table family gathering - maybe a wedding?-  catered for on the alley in front of the houses, with all the neighborhood joining in, apparently. The street is not something 'outside' your house. It's instead part of your home. There you eat, play (maybe pray too), and quite possibly also -though I did not witness it- love.
And inside the houses -as you can inspect them freely from the street- always the same mix: a fridge, a plasma TV, a temple and the motorcycle. Sometimes, a table, but people watch TV and eat sitting on the floor, so tables are not really needed. 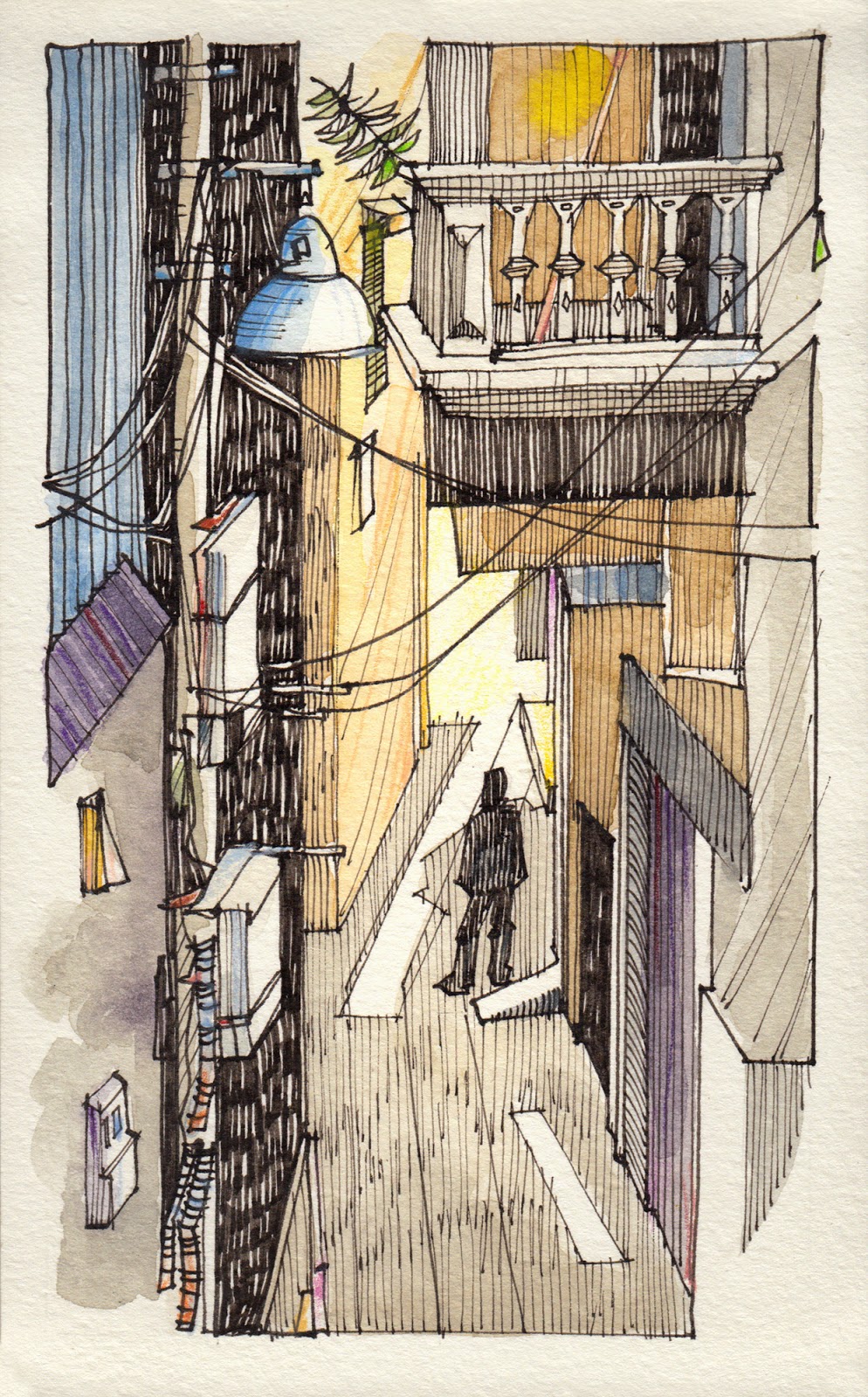 Most southamerican cities were built over a grid, brought by spaniards and directly inherited from the Roman Legions. In every argentine city- as in many other countries- the grid is tyrannical, and centers in a square where -unavoidably- there is a statue of the national hero or founding father near the cathedral and a town hall.

For my eyes, these oriental cities, where streets are narrow and winding, house fronts so close to one enother you can jump to the front neighbor's balcony, and building itself a mass of haphazard materials seemingly sewn together by a nightmare of cables, is as strange and alluring as the moons of Jupiter.
Posted by Jorge Royan at 3:38 AM